Canadian Anglican Chaplaincy in the Great War: The Road to Ypres, 1915

The excellent Great War blog reminded me that 8 May was the 100th anniversary of Frezenberg Ridge, a defensive action during the German offensives in the Ypres Salient when the Princess Patricias Canadian Light Infantry, as part of a British brigade, held the line in a bloody but successful action that the PPCLI remember to this day. 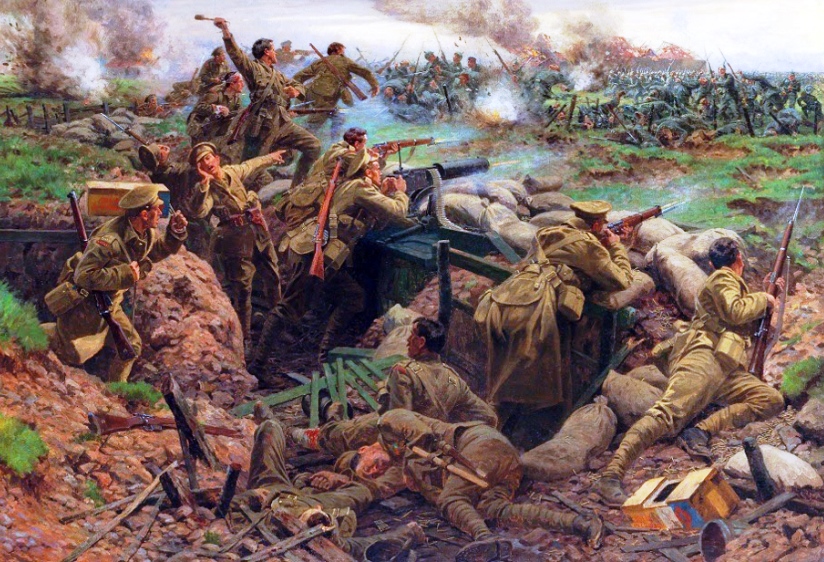 The Patricias at Frezenberg, as painted by William Barnes Wollen.  Prints of this painting probably hang in every Canadian Army Officers’ Mess across Canada.

This story reminded me that back in late March, when I was very busy finishing my MA thesis, I wrote a piece for the Canadian Armed Forces Anglican Ordinariate newsletter continuing my account of Canadian Anglican padres and what they were doing in the Great War a century ago.   A previous piece, blogged here, describes chaplaincy during training in England at Christmas, 1914.

I didn’t blog the subsequent piece I wrote for the Easter newsletter, which takes the account up to Holy Week, 1915, when the Canadian Expeditionary Force was relocating northwards to the Ypres Salient, where they would arrive just in time for the German offensive now known as Second Ypres.

While it’s a bit late, here’s the article.

Holy Week 1915 saw the 1st Canadian Division finally in France and on the move to the Ypres salient.  Of the thirty-three chaplains who had sailed to England with the First Contingent of the CEF, one would never see action.

Padre George Leycester Ingles, an Anglican, was the victim of an outbreak of spinal meningitis that had afflicted the Canadians during the winter of 1914-15 on Salisbury Plain.  He had “worked unremittingly”, ministering to soldiers in No. 1 Field Hospital.  The Ontario Star reported that he “had been in the habit of reading by the the hour to men of the regiment who were suffering from meningitis”.  It was in the performance of this ministry that Ingles contracted the disease, and died at age 28.  Padre Ingles was born in Toronto in 1886, and was a graduate of Trinity College and General Theological Seminary in New York, serving as a curate at St. George’s, Toronto.  An avid ruby  player and cricketer, before his ordination he had served as a sergeant in the Queen’s Own Regiment, and had gone over to England with them as their chaplain.  He was buried in the church cemetery at Bulford in Wiltshire (Grave Reference 1. 3. 2) and is remembered in the war memorial on the walls of the baptistery at St. Thomas’ Church, Huron Street, Toronto.

One of my CAF Anglican colleagues, Padre Don Aitchinson, informs me that Padre Ingles was also an alumnus of Trinity College School, a boys’ school in Toronto, and was the first TCS boy to fall in the Great War.  Ingles was at least the sixth generation of his family to have served as clergy in the Church of England.   A previous Rev. Ingles had been headmaster of Rugby School in England in the 1700s.  Ingles had a brother, Major Charles James Ingles, who also went to France as a major in  the 98th Battalion, CEF, from Lincoln/Welland in Ontario, who became adjutant of the 2\0th BN and was wounded on 26 August, 1918.

As the First Division prepared to deploy to France, there was a controversy over their established strength of chaplains.  While the British War Office had allowed the Canadians to take eleven chaplains to France (a divisional allotment for the British was five padres), the Senior Canadian Chaplain, Major Richard Steacy, an Anglican, was persuaded to assign only three chaplains to the three frontline infantry brigades.  The remaining eight went to headquarters, artillery and hospital units.  Among the Anglicans going to France with First Division were Steacy, his deputy John Almond who was a veteran of South Africa, Montreal’s Canon Scott, who essentially smuggled himself into the trenches, and Newfoundland’s George Wells.  The remaining twenty-two Canadian chaplains kicked their heels at Shornecliffe Camp in England, under the direction of another Anglican, Frederick Piper.

The first Canadian troops to land in France were actually the Princess Patricias Canadian Light Infantry, who had been assigned to a British Division.  They spent the first Christmas of the war in France.  The Canadian First Division began crossing in early February, landing at St. Nazaire as depicted in Edward Bundy’s famous painting.

The Canadians spent March in Fleurbaix, south of Armentières, learning their new craft under the tutelage of experienced British troops.

That month First Division played a peripheral role in the failed British offensive at Neuve-Chapelle.  While their introduction to the trenches was relatively quiet, it was not without cost.  Of the 18,000 Canadians who were the first in France, March 1915 cost them 68 killed and 210 wounded from snipers, artillery, and small skirmishes.  About 35 men in the Division answered Sick Call each day, many suffering from the effects of long-term exposure to cold and water, a condition known as trench foot, and about 10% of these were evacuated to field hospital  Chaplains too were learning their craft as they ministered to sick and wounded, and buried the first dead.  Already the ludicrously small ratio of a half dozen frontline chaplains to 18,000 soldiers must have been apparent to all who cared to consider it.

In late March, First Division became part of the British Second Army and was ordered to relocate to the key Ypres sector of the line, where it went into reserve positions.   By 1 April, elements of the Division had marched to Estaire, a small French town on the River Lys, some distance south of Ypres.  Canon Scott remembers his time in Estaires as one of rest “before the storm”, and described fine spring weather.   For the troops it was a time of some rest, interspersed with regular drills, practice attacks and route marches.   Scott held a Good Friday service on the steps of the Town Hall in Estaires, and struggled to be heard above the sound of “lorries” and a stream of motorcycle dispatch riders.

On Easter Sunday Scott commandeered a hall which had been used as a cinema.  “There was a platform at one end and facing it, rows of benches.  On the platform I arranged the altar, with the silk Union Jack as a frontal and with cross and lighted candles for ornaments.  It looked bright and church-like amide the sordid surroundings.  We had several celebrations of the Holy Communion, the first being at six a.m. A large number of officers and men came to perform their Easter duties.  A strange solemnity prevailed.  It was the first Easter spent away from home; it was the last Easter that most of those gallant young souls spent on earth.  The other chaplains had equally large attendances.  We sang the Easter hymn at each service, and the music more than anything else carried us back to the days that were.”

Individual units appear to have observed Holy Week in some fashion.  The War Diary of the 7th CEF, a battalion composed of men from the West Coast (the 7th is perpetuated today as the British Columbia Regiment), indicates that the unit held “divine service” on Good Friday, 2 April, before dedicating the rest of the day to drill and mock attacks.  On Easter Sunday the 7th went to Ploegsteert and La Boutillerie “to place [word indistinct] over graves of those killed in action”.  The next day the men of the 7th were on the road north by 07:00hrs, marching towards Ypres.  Unbeknownst to them, they were also marching to the Calvary of their trial by battle.

Military Picture of the Week

Starting back at this slowly. Amazing photo of the aftermath of contemporary war in Afghanistan from a NYT photographer. Haunting image. MP+

Acres of abandoned containers used to ship in NATOs war in #afghanistan now sit idle in the semi industrial outskirts of #Kandahar city. On assignment for the @nytimes
A photo posted by Bryan Denton (@bdentonphoto) on May 9, 2015 at 1:17pm PDT

Email ThisBlogThis!Share to TwitterShare to FacebookShare to Pinterest
Labels: Military Picture of the Week, Over There
Newer Posts Older Posts Home
Subscribe to: Posts (Atom)