Soldiers And Their Lovable (And Costly) Robots

A few days ago I noticed a piece by Katy Waldman on Slate.com about how soldiers may be developing excessively close attachments to the robots, according to a professor who is doing research into "human/robot interrelations".

"She interviewed 23 explosive ordnance personnel—22 men and one women—who worked with robot sidekicks, looking at how they imagined the bots in relation to themselves. She found that some troops anthropomorphized their machines, assigning them names (at times painting them on), genders, and even personalities. And while the soldiers denied that affection for the bots colored their combat strategy, they reported feeling sad and angry when the equipment was destroyed."

The irony, as Waldman notes, is that militaries are developing robots for purposes such as ordnance and explosive demolition to spare human soldiers from engaging in this risky tasks; "if troops care too much about the bots to put them in danger, that hesitance could compromise outcomes in the field."

However, yesterday the New York Times reported that while the US Air Force has done well in acquiring killer (if not lovable) robots, the Army has not had the same success in acquiring funding for so called Autonomous Ground Vehicles.   There have been some advances, such as the Legged Squad Support System, a vehicle the size of a cow that can carry 400 pounds of equipment.  Watch this video and you can easily imagine soldiers becoming emotionally attached to this device.  However, budget reductions, and the ongoing cost of supporting human soldiers damaged in the wars of the last decade, may well mean that the peaceful (or terrifying) future of killer robots predicted here by John Arquilla may not happen anytime soon.

There are days this school term where I have the chance to worship in the Lutheran seminary chapel and yesterday, Sept 18, our prayers remembered the life and death of Dag Hammarskojold, the second Secretary General of the UN, who served from 1953 until his death in 1961.

Last week it was reported that the US National Security Agency might have information on the circumstances surrounding Hammarskold's death in a mysterious air crash in Rhodesia (now Zambia), thus fuelling the mystique around this figure, who seems legendary and effective in comparison to more recent successors.   Today the UN appears sadly irrelevant as a force for peace in the world, even if the UN of Hammarskold's day is more mythic than real, akin to JFK's Camelot.

What I didn't know until I worshipped with my Lutheran friends yesterday was that DH was also a man of faith, and recorded in his thoughts in a journal, published posthumously, which he called Markings.  I have only had a chance to read some brief excerpts of his writing, but was impressed by his careful and persistent thinking about the need for humility as the key to a life well lived.  Here's an example.

“Humility is just as much the opposite of self-abasement as it is of self-exaltation. To be humble is not to make comparisons. Secure in its reality, the self is neither better nor worse, bigger nor smaller, than anything else in the universe. It *is*--is nothing, yet at the same time one with everything. It is in this sense that humility is absolute self-effacement.To be nothing in the self-effacement of humility, yet, for the sake of the task, to embody its whole weight and importance in your earing, as the one who has been called to undertake it. To give to people, works, poetry, art, what the self can contribute, and to take, simply and freely, what belongs to it by reason of its identity. Praise and blame, the winds of success and adversity, blow over such a life without leaving a trace or upsetting its balance.” ― Dag Hammarskjöld, Markings

Rest eternal grant to him, O Lord, and may light perpetual shine upon him.

Seen On The Morning Run

One great way to get to know a new place is through running.   For the last two months I've been exploring my neighbourhood since we moved to Kitchener-Waterloo.   Some runs have been less fruitful than others.  There was the disastrous morning I discovered that the route I had plotted to take me home from a trail head led me through a busy industrial park with no sidewalks.

Most runs have been less stressful and have allowed me to reacquaint myself with a part of Canada that is so different from the prairie that has been my home for the last three years.

Here was the view a few days ago, on a fairly hot and humid morning along the Grand River.  Views like this make the occasional steep hill along the trail worthwhile. 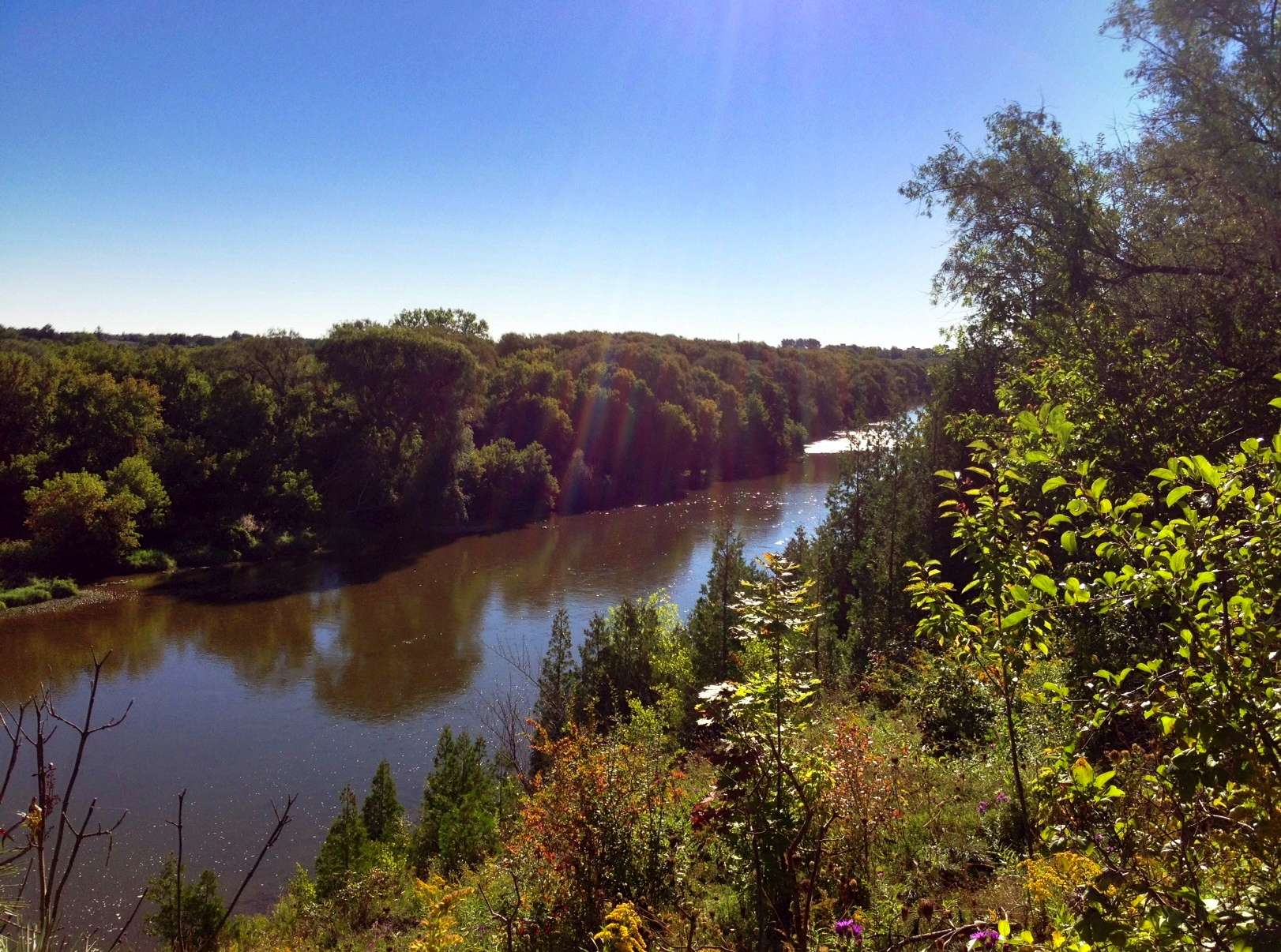 Here's a selfie taken after that run, in which the only military thing about me is the T shirt.   The long hippy hair and goatee are decidedly non-regulation, but since the closest Regular Army unit is two hours away and my place of duty is at a civilian university, it can stay for now.   Sadly, I have just made an appointment for 1 October to get a new military identity card, so I will have to address this deplorable grooming standard soon.   But not too soon. 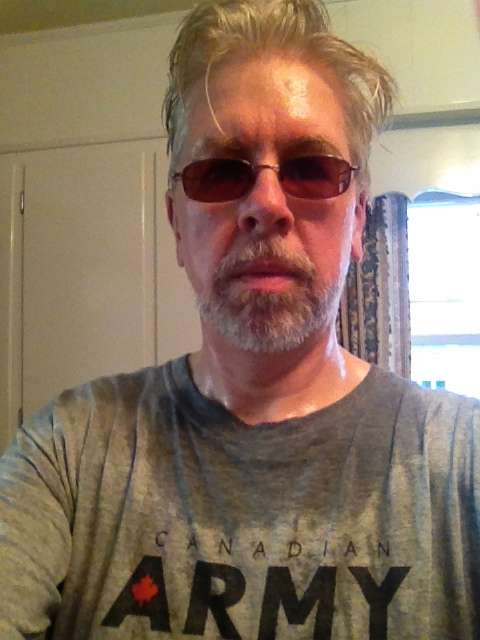 Email ThisBlogThis!Share to TwitterShare to FacebookShare to Pinterest
Labels: Seen on the Run

Toy Soldiers In Politics And In The Arts

Hello everyone, I'm back to blogging after a month and a half of packing, moving, unpacking, and getting used to a new place.   More about that, in so far as any of it might be interesting, later.

As a brief aside, I am composing this post on my new MacBook Air, which I bought at back to school prices and with a student discount, which is a nice deal if you can get it at fifty years age.   I'm using a Mac app called Mars Edit, from the wonderfully named publisher Red Sweater.  I am still figuring it out, but it is intuitive and much easier to use than trying to use Google's Blogger tools in my browser.  At $30 it's not cheap, and a casual blogger might not need it, but if you are a Mac person, you may wish to check it out.

My other blog is predicated on the idea that toy soldiers are interesting and fun to play with, but not everyone agrees with that premise.  In contexts other than the war-games table, toy soldiers can be political, and even sinister.  In this image from the Foreign Policy website, they are used in Santiago in front of the Presidential Palace to mark the 40th anniversary, on Sept 11, of the military coup in Chile.

As thoughtful war gamers know, there is something both seductive and pathetic about toy soldiers.  They offer us fantasies of command and control unknown to real battlefield commanders, but their vulnerability to badly conceived attacks and the price they pay for our failures on the gaming table hints at horrors that our gaming would keep at a safe remove.  That (as I understand it) is the point made by art critic Dave Hickey in his preface to a book of disturbing photographs of toy soldiers by David Levintha, of which you can see some here:

"As described by art critic Dave Hickey in his foreword to War Games (the soon-to-be published book featuring Levinthal's full body of toy-soldier work), Levinthal's art is "a kid's solution to an adult dilemma." Levinthal, Hickey writes, has "combined the aggression of battle, the visual aggression of photography, and the built-in cultural aggression of 'serious' art to create a lethal cocktail -- a body of objects that are admirable, affecting, beautiful, and not comfortable at all."

But Levinthal's work is more than just arranging toys in play-fighting poses -- or merely an imitation of war. As Hickey keenly notes, Levinthal's photographs contain an "intimate appeal of toy soldiers and the fantasy of omniscience they bestow. First, toy soldiers are all very much the same, they all wear uniforms, and they are just where they are. They represent a species not a class. They have no dreams, no interiority or individuality, and Levinthal never tries to infer that they do."