Advise and Assist In Iraq, Not Combat, Says Canadian Commander

A few days ago the Military Times noted that “American troops in Iraq appear to be more cautious than Canadians”.  The article noted that while US advisors to the Iraqi military are working at the headquarters level, Canadian Special Forces advisors are working on the front lines, and have exchanged fire with ISIS militants.

Since then, a Canadian Armed Forces spokesman has confirmed that there have been two more firefights between Canadian military personnel and ISIS militants.  The spokesman said that the Canadians, among some 69 Special Forces personnel in Iraq, were “acting in self-defence [and] effectively returned fire, neutralizing the threat”.

On 20 January, General Mike Rouleau, commander of Canada’s Special Forces Command (CANSOFCOM) confirmed that while his personnel, including snipers, had “neutralized” ISIS machine gun and mortar positions, their work was “very much in the advise and assist role”.

At present there are 69 confirmed CANSOFCOM personnel in Iraq, besides a larger number of Royal Canadian Air Force personnel who are also involved in the mission, known as OPERATION IMPACT.

Email ThisBlogThis!Share to TwitterShare to FacebookShare to Pinterest
Labels: Canadian Armed Forces, Over There

You may be confusing this lady with Celine Dion’s latest act in Las Vegas.  She’s actually our Miss Canada, competing in the Miss Universe pageant national costumes.  At least she didn’t go dressed as the Alberta Tar Sands.  I’m not sure she’s any less garish than Miss Ireland.  Decide for yourself here. 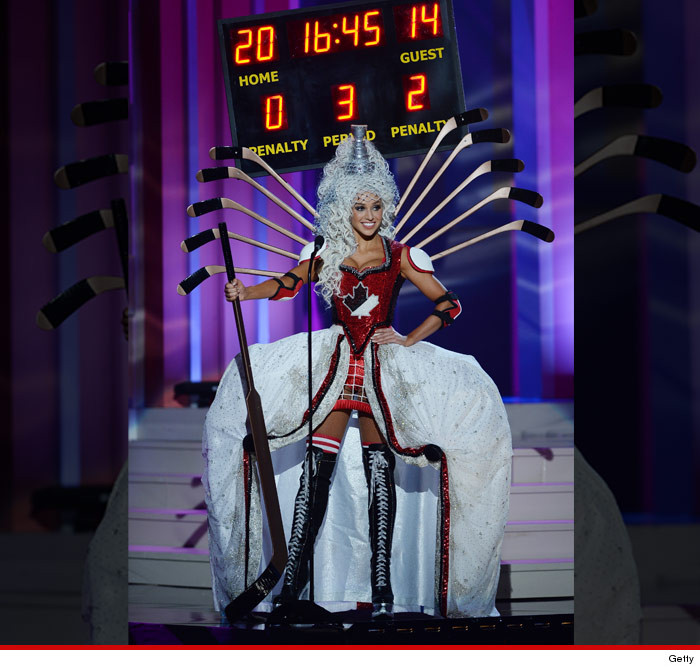 The Vanishing Internet (And Why It Should Be Archived)

I’m currently writing an MA thesis, and as I start piling up the chapters and the footnotes, I find that perhaps a quarter of my citations either include URLs to web-hosted versions of sources that are also available as print sources, or exist exclusively as web-hosted sources.    In “the Cobweb”, an article in this week’s New Yorker magazine’s Annals of Technology series, Jill Lepore notes that the problem with sources hosted on the web is that they don’t stick around as long as we think.  “The web”, she writes, “dwells in a never-ending present.  It is - elementally - ethereal, ephemeral, unstable, and unreliable”.

Lepore talks about something called “link rot”.  Here’s an example from my own research.  Yesterday I was checking a secondary source where the author cited numerous references in the form of URLs hosted on Canada’s Department of National Defence servers.  However, when I checked one of those references, the URL no longer existed.  It had been taken down or overwritten.  The secondary source I was using said at the top of its list of footnotes that “All web citations were active at the time of the writing of this article” or something to that effect, but in the two years since the author had written that article, at least one footnote no longer worked.  Probably more than one no longer worked, if Lepore’s data is right.

Lepore cites a 2014 Harvard Law School study which found that “more than 70% of the URLs within the Harvard Law Review and other journals, and 50% of the URLs within United States Supreme Court opinions, do not link to the originally cited information”.   Another study suggests that of 3.5 million scholarly articles published in academic journals from science, technology and medicine published between 1997 and 2012, one in five links “suffers from reference rot”.

Libraries have always been subject to attrition, loss, rot and even physical destruction, but somehow they’ve survived and knowledge has been transmitted over time.   To make that transmission easier, scholars invented the footnote.  But now the footnote itself is in danger of being made unstable as more and more knowledge moves to the shifting sands of the internet.

Here’s an example of how the internet vanishes and why its loss matters.   After the downing of the Malaysian Airliner over the Ukraine last summer, we knew that Russian-backed separatists were likely behind it because they boasted of it over social media.  Those media traces were soon scrubbed, but they were captured by self-proclaimed internet archivists. As Lepore puts it, “One day last summer, a missile was launched into the sky and a plane crashed in a field.  “We just drowned a plane,” a soldier told the world.  People fell to earth, their last passage.  Somewhere, someone hit “Save Page Now”.

But, because most pages aren’t saved, knowledge is vanishing, paradoxically, as the capacity of the internet expands.

These thoughts will remain here until I either delete this blog or some VP at Google decides that Blogger is no longer part of its business strategy, and Blogger, like Geocities before it, is bulldozed.  Just a small example of what Lepore is talking about.

Email ThisBlogThis!Share to TwitterShare to FacebookShare to Pinterest
Labels: Blogs and Blogging, Literacy and Literature

Military Picture Of The Week


Happy New Year.  January’s not over yet so I can say that, since I haven’t posted here since 29 December.  Finishing my MA thesis has taken much of my time but while I have been updating the wargames blog, this one has been awkwardly silent.  Maybe it’s felt too much like work.
At any rate, time to pick things up a bit.  This image from this week’s Foreign Policy The World In Photos This Week caught my attention as a splendid example of how cultural traditions can live on in together with contemporary, utilitarian military uniforms.  The caption reads: “Recruits of the Indian Central Reserve Police Force Constables stand in formation, Jan. 16”.

The CRPF is a paramilitary organization.  You can see them going through their paces here.
Posted by Mad Padre at 9:48 a.m. No comments: